Have you ever heard that? You mention to someone that when you squat your knees hurt or when you deadlift your back hurts and the first thing they say to you is that "your form sucks". And, logically, their criticism makes sense. If your form is bad, you'll get hurt. It's that simple.

While form and technique are crucially important to 1. prevent injuries, 1. improve quality of movement, 3. refine movement patterns, 4. enhance muscle recruitment, and 5. correct firing pattern, on top of many other things, form and technique may not be the end-all-be-all to staying injury-free.

While we can change our biomechanics and movement quality, the amount to which we can refine and change biomechanics is very finite. Limited. In other words, there is only so much we can do and only so much range of motion a person can go through. Biomechanics, form and technique, is just one factor of many that can result in an injury from an exercise.

Plus - imagine having to go about your daily activities thinking "Stabilize the lumbar, engage the transverse abdominis, retract my scapula - oh and depress the scapula as well... Press through my distal phalages!"

We don't got time for that.

And while, yes, a lot of injuries do occur because of poor biomechanics, we must address the root of the problem. What exactly is causing these poor biomechanical movement patterns? Can it simply just be that someone hasn't mastered the hip hinge? Or can't squat with their knees tracking with their toes? Simple movement "rules" like these are fairly easy to teach and master (if you have a good trainer).

I hear it all the time. "Well I really want to make sure I have good form." And that's great! Awesome! I want you to have good form too! But we must realize that form isn't the only thing to worry about.

Because explain to me then - how does someone with a perfect hip hinge pattern and core stability hurt their low back when doing a Romanian deadlift? Obviously, form was not an issue and we can only nitpick at form for so long before it becomes almost irrelevant. A lot of times, people, trainers included, are so caught up on form that we don't address other factors.

Like tolerance to load. Firing patterns. Muscle inhibition. Your body's response to perceived threat AKA pain.

All of these CAN be influenced by your form but even with perfect form, you could still feel a deadlift in your back instead of your hamstrings and glutes. 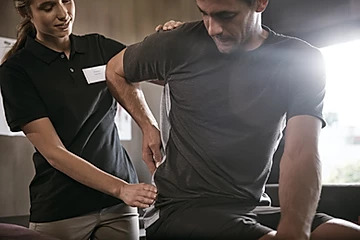 The main factor that I want to talk about is tolerance to load. Let's use the lower back as an example.

Fear plays a big factor in this – if someone is afraid and apprehensive about their low back, the brain doesn't differentiate fear from an actual threat. So, it is on alert for a threat and the body responds to threat of movement with pain signals. Pain means "Don't move or touch this area! It's injured!". Pain is meant to help you avoid injuring yourself further. But when these pain signals are overactive and unhelpful, they can actually be hindering you from movement. And movement is the medicine people often need to break that pain cycle.

Anecdotally, I've seen people's low back pain improve as they do more hinging patterns and unilateral lower body work. This means deadlifts, squats, and lunges. All things that people tend to avoid when they are suffering from low back pain.

Of course, we start light and gradually build. The idea is to build a tolerance to movement and load. We build tolerance to movement by hinging at the hips and bending forwards, letting our bodies know that this motion is not threatening and we don't have to hurt when we do it. We then build tolerance to load by slowly and progressive loading the movement pattern. This creates strength and resilience. The goal is that you can bend over to pick up a box off the ground without even having to worry about throwing out your low back.

And it becomes a process that you need to prioritize on a regular basis. Often, people will go to physical therapy for a low back issue, feel better, but they won't continue improving upon and strengthening the base that physical therapy built. And then people get re-injured which not only causes physical pain, but can be psychologically discouraging.

"I stopped working out because of my back pain. I was healed but the pain is back!"

If you never built up a base where movement and load tolerance was improved, and if you don't continue to improve that tolerance with progression overload, then I honestly would not even be surprised.

So form and exercise technique? Yes. Very important. But we can only alter these things so much. To truly avoid injury and to capitalize on good form and technique, we must create tolerance. And how to create tolerance? Technique-based, progressively overloaded resistance training.